In that blog post he used the following example:

And my interest was drawn to the part where the url variable was concatenated.

And then I also saw these Tweets in my timeline. 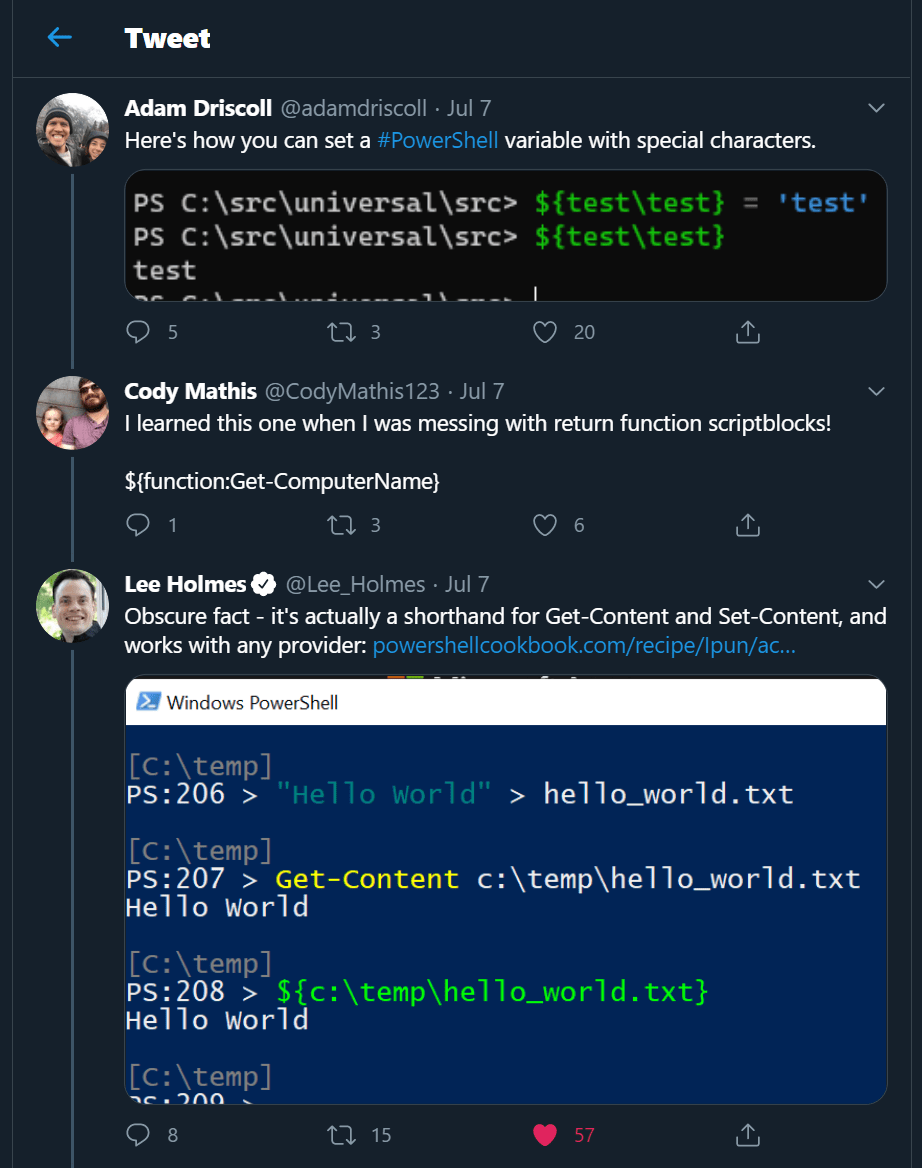 So what did I teach during my PowerShell classes? Right, you start at the PowerShell help.

A variable is a unit of memory in which values are stored. In Windows PowerShell, variables are represented by text strings that begin with a dollar sign ($), such as $a, $process, or $my_var.

Variable names are not case-sensitive. Variable names can include spaces and special characters, but these are difficult to use and should be avoided.

Ok I already knew that, but does the help file explains ${foo} = ‘bar’?

Yes there is information in the About_Variables help file. Told you so to start with the Get-Help cmdlet ;-)

VARIABLE NAMES THAT INCLUDE SPECIAL CHARACTERS

Variable names begin with a dollar sign. They can include alphanumeric characters and special characters. The length of the variable name is limited only by available memory.

Whenever possible, variable names should include only alphanumeric characters and the underscore character (_).Variable names that include spaces and other special characters, are difficult to use and should be avoided.

For example, the following command creates and then displays a variable named “save-items”.

The following command gets the child items in the directory that is represented by the “ProgramFiles(x86)” environment variable.

To refer to a variable name that includes braces, enclose the variable name in braces, and use the backtick (escape) character to escape the braces. For example, to create a variable named “this{value}is” with a value of 1, type:

So now I’ve learned that you can enclose the variable name in braces if you want to use special characters in your variable name.

But this does not apply for the example code James Truher used in his blog post.

He creates ‘normal’ variable names without any special characters, like baseUrl, urlPathBase, urlResourceName and url, so why is he using

to concatenate the ‘normal’ variable names into a new variable url?

And there is where Lee Holmes helps in his Tweet response.

Obscure fact - it's actually a shorthand for Get-Content and Set-Content, and works with any provider: https://t.co/CydXeLDnjL pic.twitter.com/lyKuIVfnlD

So Jim is here using Get-Content via the Variable Provider to the different variables. He is doing the following:

Let’s try this too:

I’ve learned something new about PowerShell variables, hope you also found this useful.